ABOUT THE LADIES WITH LENNIES CONtest

Ladies with Lennies was a photo and video entry contest promoted in 2019. The goal of the contest was to encourage women to share their passion for angling, no matter their experience level.

​The prize? The opportunity of a lifetime – a fly in fishing trip to Black Bear Island Lodge for a lucky female angler and a chance to fish with Wes David from Fishing the Wild West TV. ​

The Trip of a Lifetime
WRITTEN BY JESSICA PALLISTER-DEW

According to the ASA (American Sportsfishing Association), Women represent the largest emerging market within the fishing industry. Yet, they make up just 1/3 of all anglers.

The Ladies with Lennies contest was discussed a year and half before any bags were packed. The promotion was launched in partnership with Len Thompson Lures,  Black Bear Island Lodge and Fishing the Wild West TV.

I’m a woman who works in the fishing industry so I know first hand how intimidating it can be to proudly announce "I'm an angler".

The goal of this contest was to encourage women to share their passion for angling, no matter their experience level. The prize? The opportunity of a lifetime – a fly in fishing trip to BBIL for a lucky female angler and their female guest. I was lucky enough to tag along.

Over 200 women submitted photos and the stories varied widely.

In the end, it came down to a public vote. 3000 votes were cast. The winner, Stephanie Roberts was well deserving and rallied her many supporters in the Lethbridge Fish & Game community. She not just volunteers, but founded and organizes an very successful local fishing day. She has organized a total of 9 youth fishing days which provide over 550 youth (annually and free of charge) the fishing gear they need to be successful on the water.

Unfortunately, very last minute, Stephanie’s nominated fishing partner, Shelby, was not able to attend the trip. But, this avid angler was still game for an adventure. I had met Stephanie just once, the day the winner was announced at the Edmonton Boat and Sportsman Show. The fact that she was willing to go on solo trip with a stranger told me all I needed to know about this girl. She was up for anything and I knew it was going to be a complete blast.

It exceeded all expectations.

Both Stephanie and I had never been to a lodge so to say that we were excited would be an understatement. Black Bear Island Lodge did not disappoint. 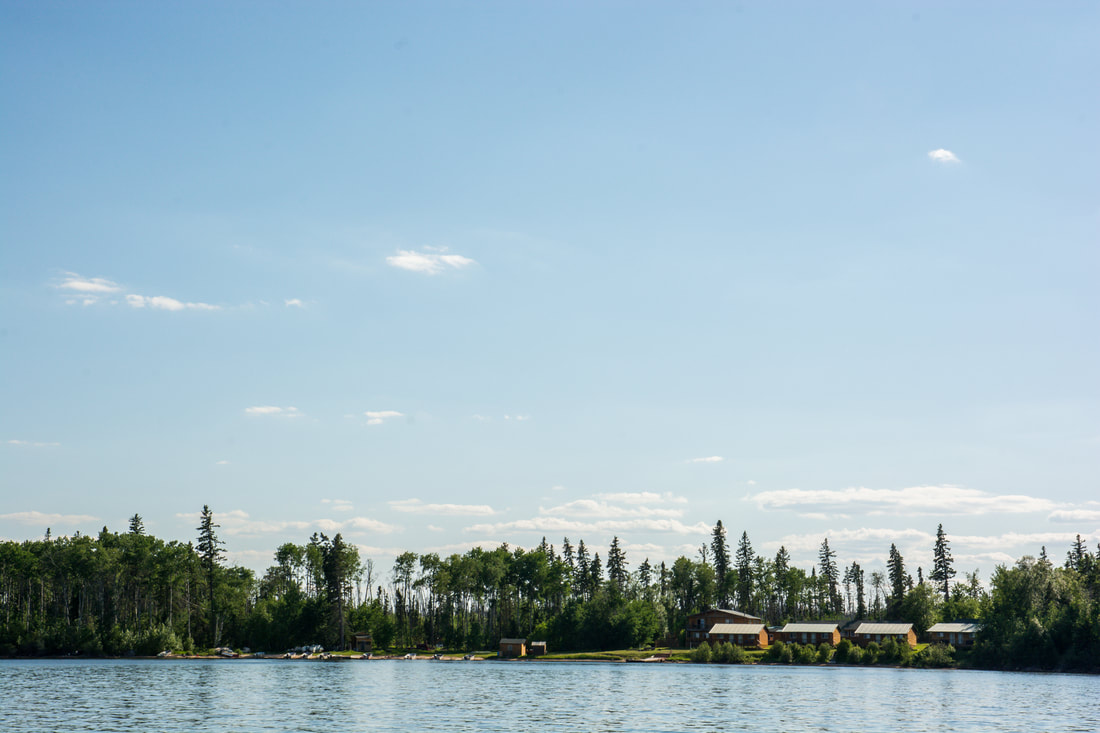 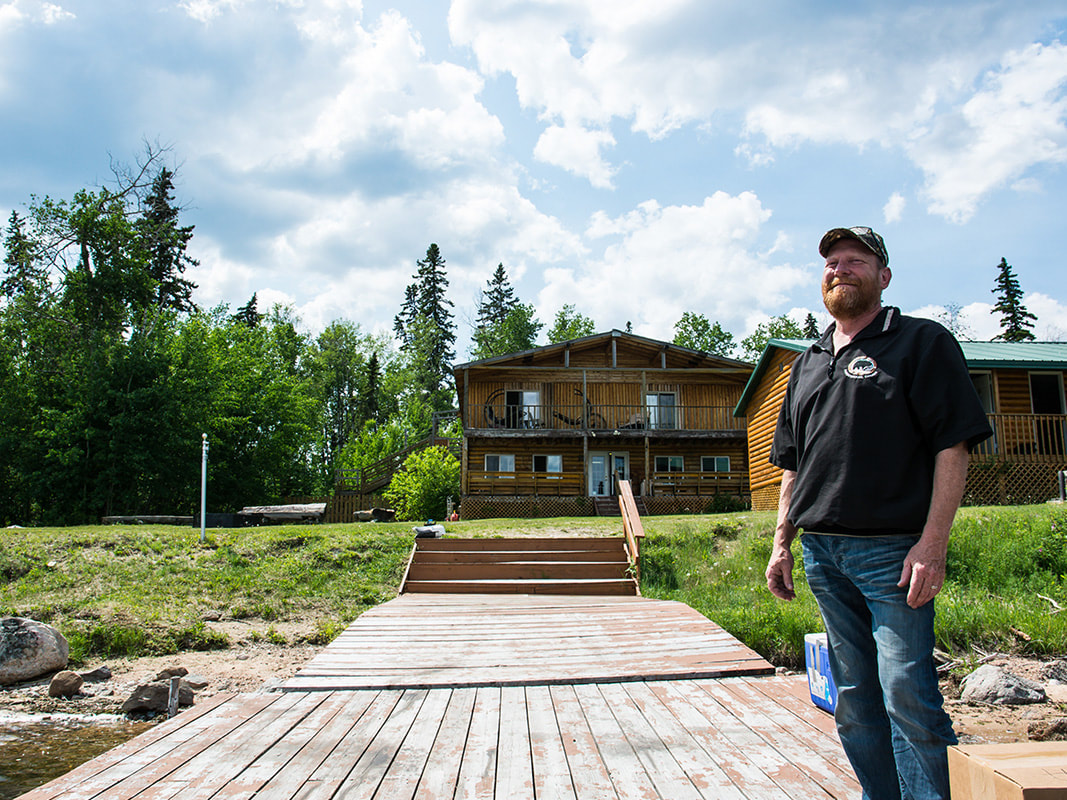 DJ Enns waits on the dock for a float plane to arrive.
Black Bear Island Lodge's owners Dawn and DJ Enns were the most exceptional hosts... they even ordered us the best weather!

We had two amazing guides during our time at BBIL; Archie and Trevor. Archie -- who wasn’t a big talker -- apparently told Trevor, “those girls have good tunes and fish pretty good.” 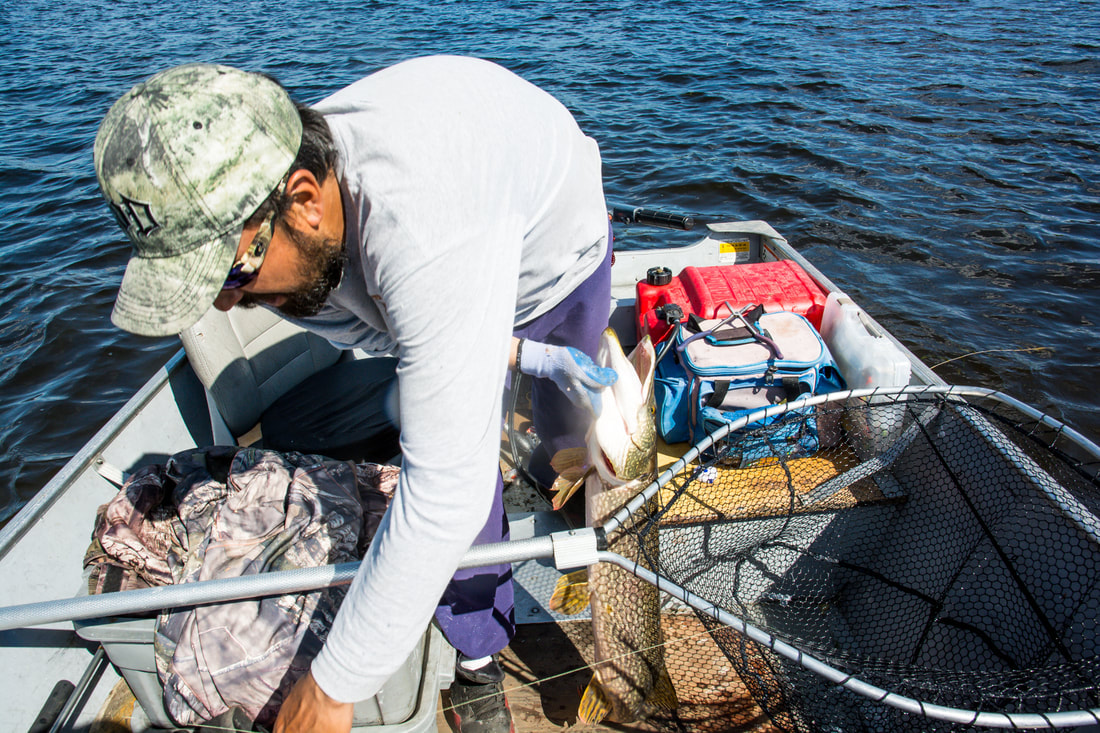 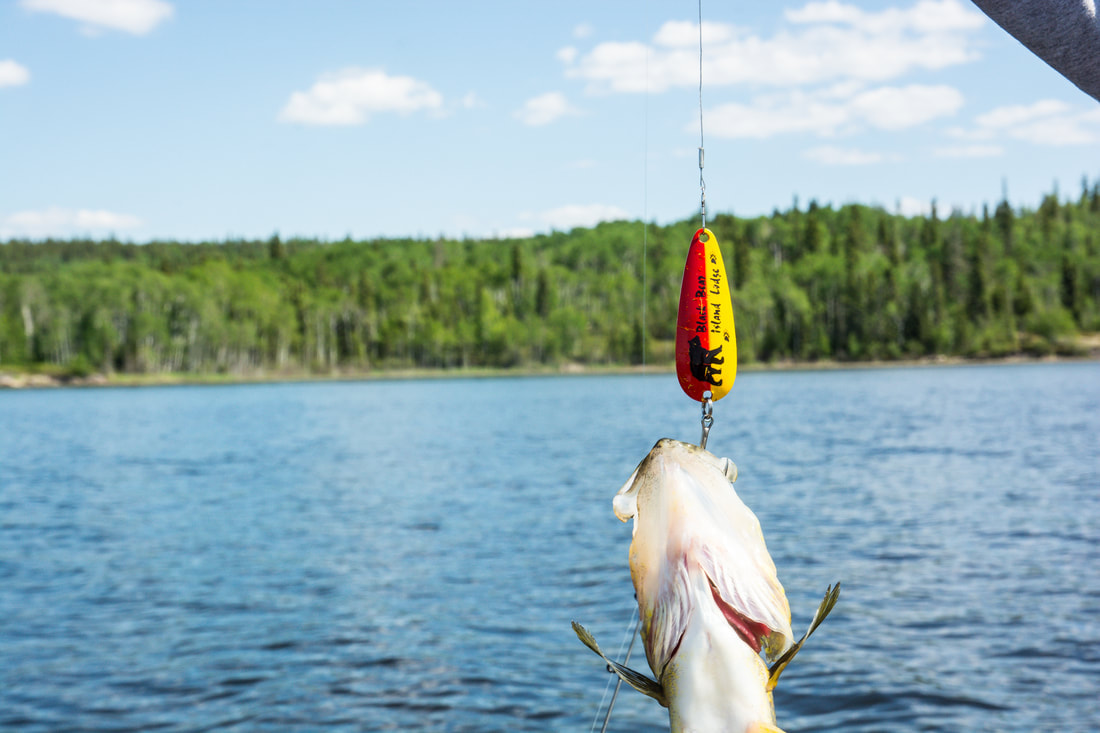 The Black Bear Island Lodge custom lures were on fire! Both the Walleye and the Pike couldn't get enough! 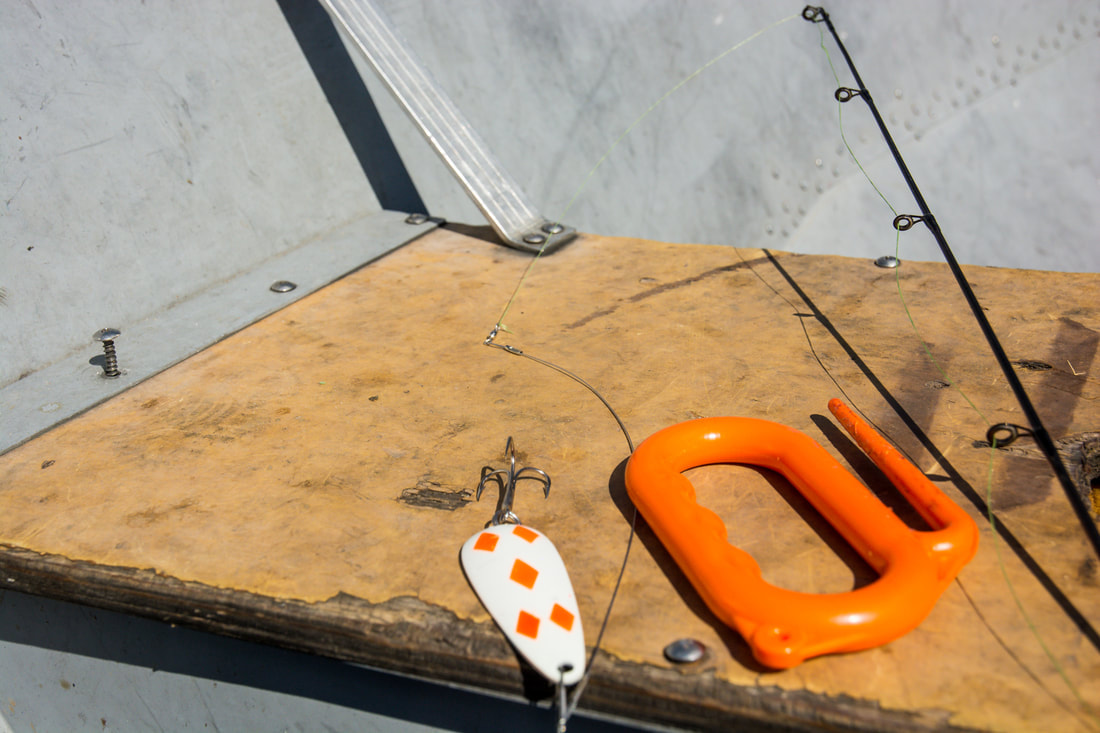 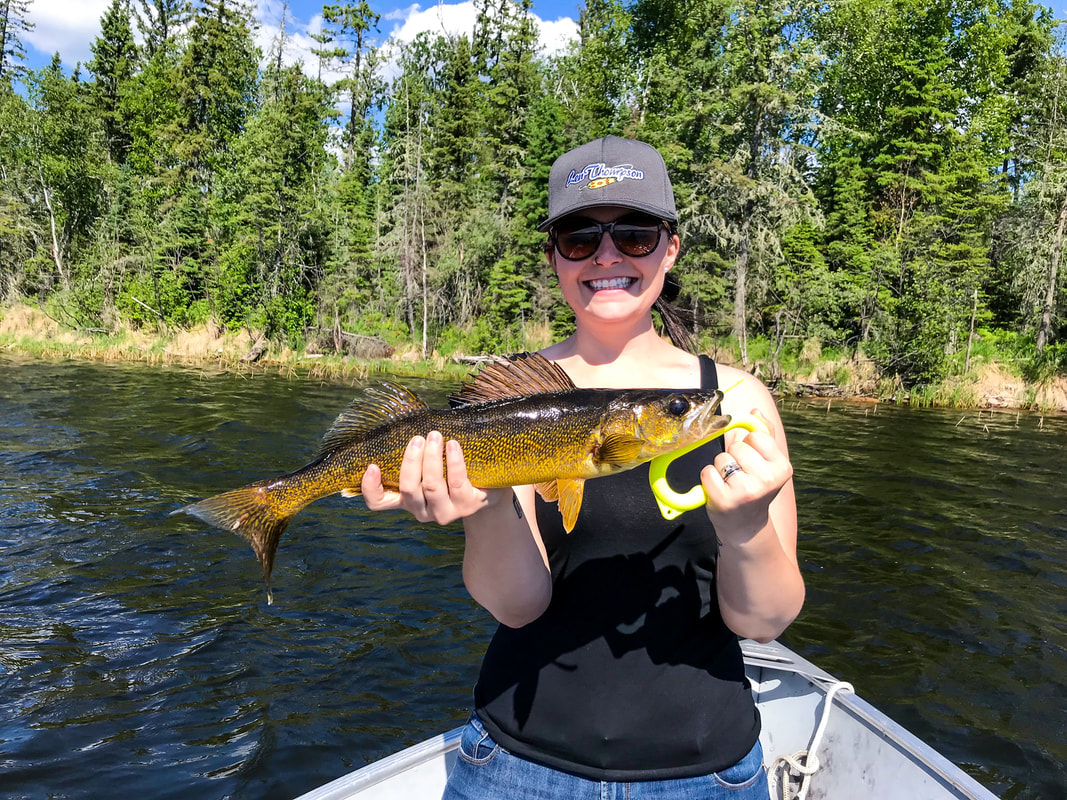 Stephanie scored her first (and second and third and fourth etc.) Walleye and at least a dozen Trophy Pike over 35”. We even convinced Dawn to join us for a morning -- a rare event that required extra planning. We so appreciated her taking the time away from the lodge and she was so much fun to fish with.

Dawn Enns poses with a beautiful Walleye, Stephanie and the Official "Off the Hook". 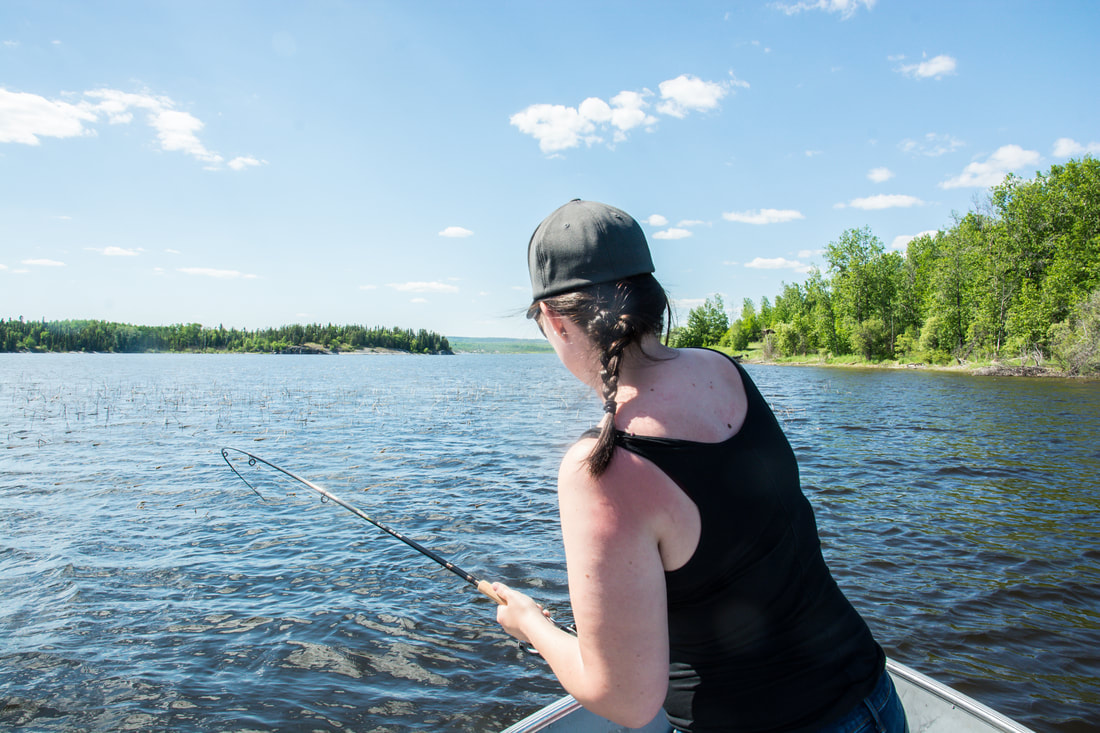 It's hard to think of a time where our rods were NOT bent... 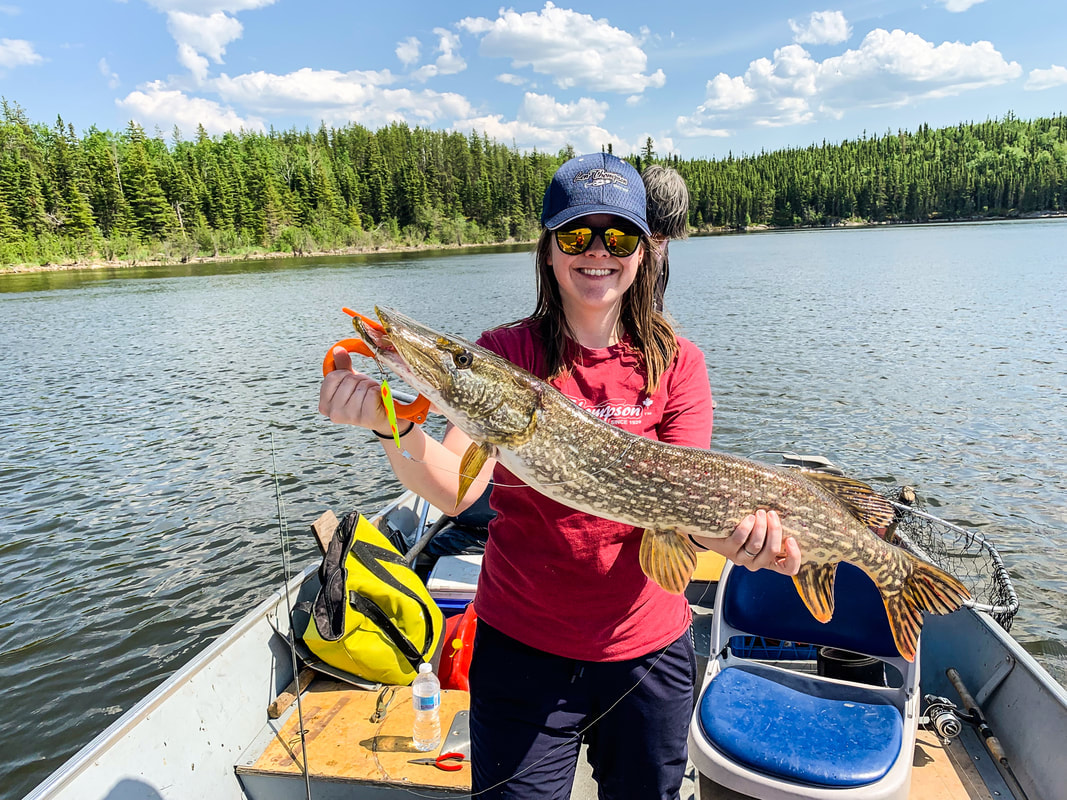 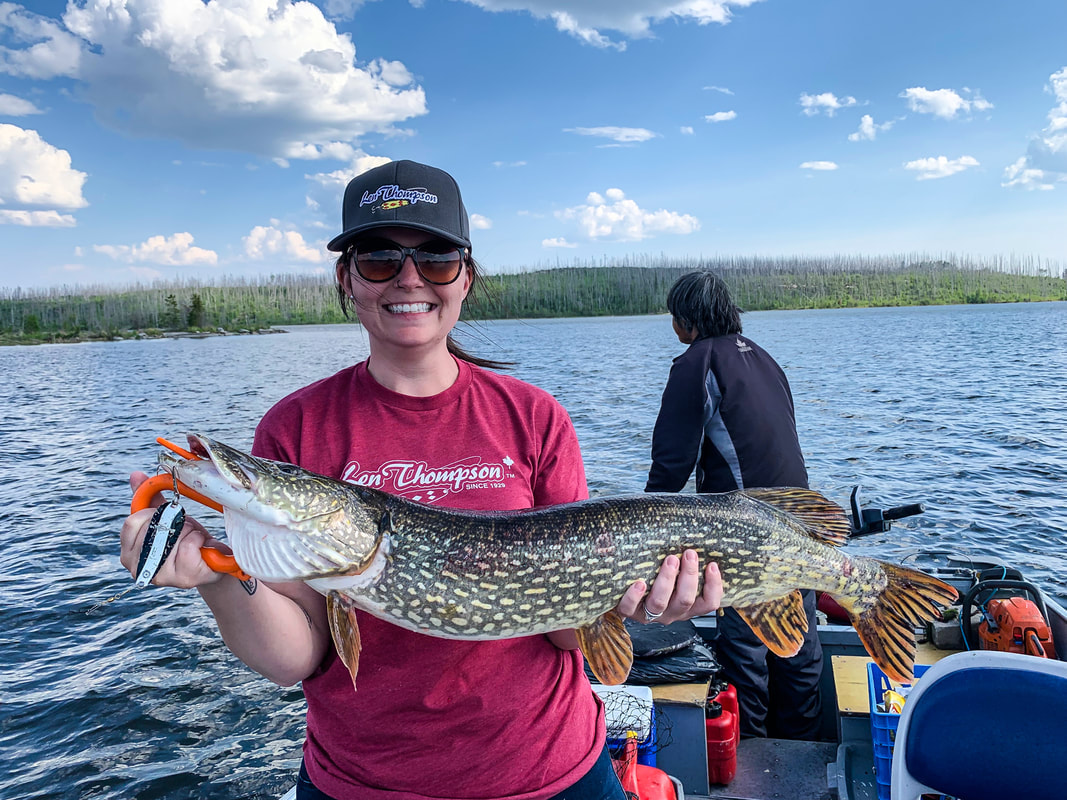 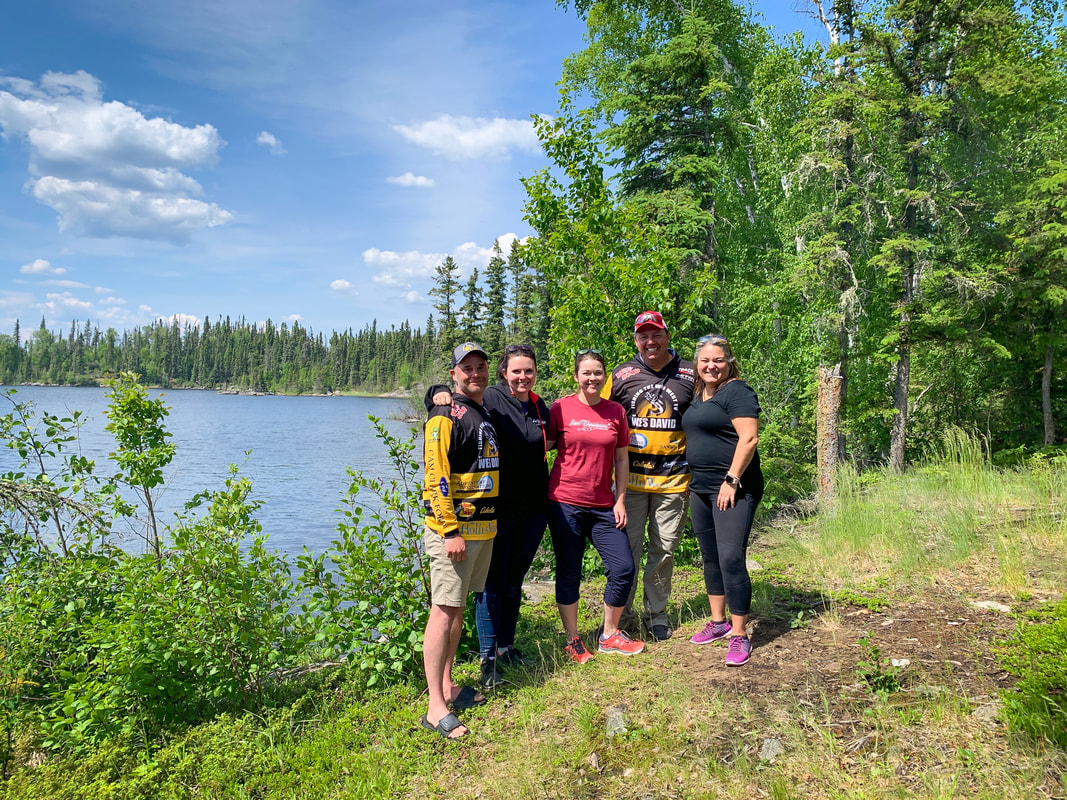 It was a tight race, but there MAY have been a trash-talkin' contest in place. Yup... You’ll have to watch the episode in 2020 to find out what the terms were. Chuck MacPherson (Chuck is the incredible camera man, editor, show developer and overall magic behind the Fishing the Wild West TV Show) captured the whole ordeal on camera.

After 3 days on the water, Stephanie and I both left with smiles on our faces, feeling refreshed and empowered.

Until our Lennies hit the water again, we’ll be dreaming of you Black Bear Island Lodge. Thank you for the memories. 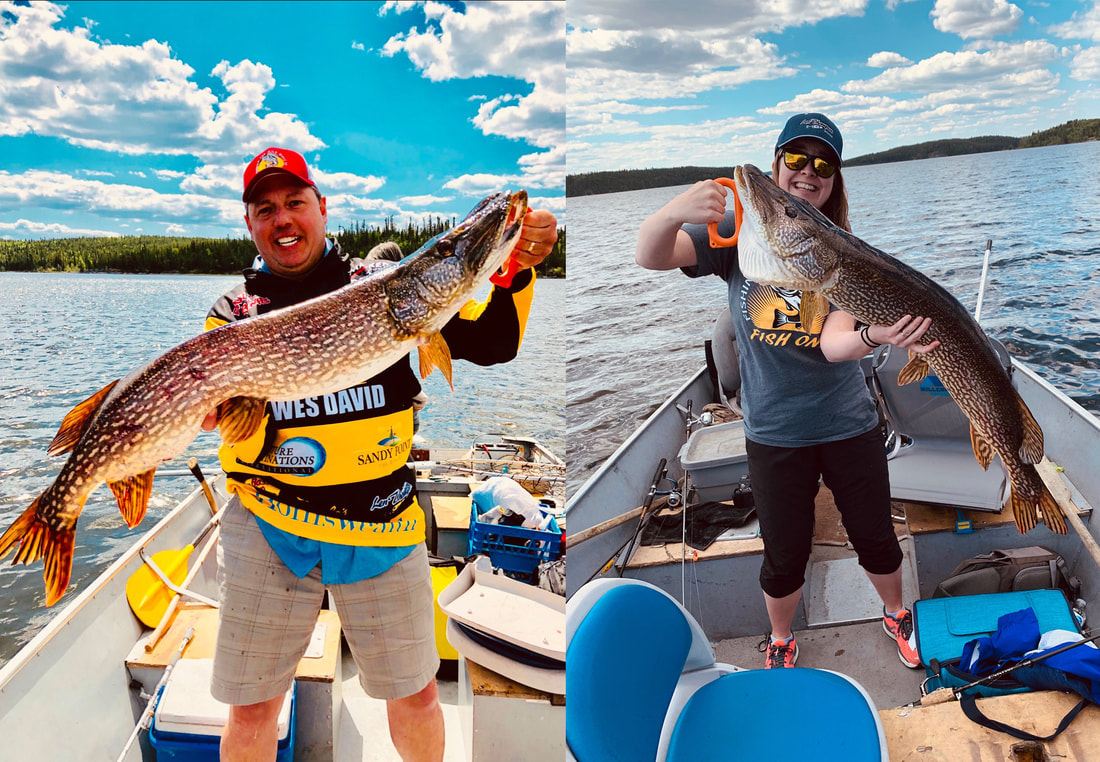